During the 1920s and 1930s, 4th Year students of Woman’s Medical College (WMC) were required to write a thesis for their Hygiene and Preventative Medicine class. I’ve been looking at some patterns running through these theses and found that between 1928 and 1932, six WMC students wrote papers focusing on the different aspects of syphilis.

A line in one of these syphilis theses caught my eye and intrigued me. Student Adele Cohn’s 1931 paper makes a reference to “Schamberg’s well-known kissing party.”

“Schamberg’s well-known kissing party” is a phrase chosen by Adele Cohn as a reference to Jay F. Schamberg’s 1911 article “An Epidemic of Chancre of the Lip from Kissing” (Journal of the American Medical Association, Vol. 57 p. 783, September 2, 1911). Jay F. Schamberg, M.D., was Professor of Diseases of the Skin at the Philadelphia Polyclinic and College for Graduates in Medicine.

A good summary of Schamberg’s “kissing party” article is found in a 1930 article on syphilis by Marion Craig Potter:

“The most common of all extragenital lesions are on the lips, from the use of common cups, the interchange of cigarettes, and kissing. Schamberg reports an epidemic of chancres from kissing following a Christmas mistletoe party. ‘The source was a young man who had a chancre of the lip. Six young women kissed by him developed chancres on the lip. Another young man developed a chancre on the lip, apparently, from the virus deposited on the lip of one of the young women. In addition, a young woman who was kissed by the offender at a third social affair was inoculated, making, in all, eight labial chancres from one source; and later Schamberg was consulted by another girl who had acquired a chancre of the cheek from a kiss from one of the aforementioned young women.’ Many babies in the cradle are infected in this manner. Kissing is dangerous!”
(from “Venereal Diseases: Part I: Syphilis” by Marion Craig Potter, The American Journal of Nursing, Vol. 30, No. 2, Feb 1930, pp. 155-160 (http://www.jstor.org/stable/3409971)

While Marion Craig Potter concludes that “kissing is dangerous” and Adele Cohn chooses the wonderful phrase “Schamberg’s well-known kissing party,” they are not alone in their appreciation for the case study. Another source mentions that “The kissing party reported by Schamberg has become classic” (see Preventive Medicine and Hygiene, 4th ed., edited by Milton J. Rosenau, 1921 p. 61).

The particulars of kissing under the mistletoe are described in detail in Brewer’s Dictionary of Phrase & Fable: “The correct procedure, now rarely observed, is that as the young man kisses a girl under the mistletoe he should pluck a berry, and that when the last berry is gone there should be no more kissing.” I haven’t yet found any discussions of this berry-limiting, portion-controlled approach to minimizing disease transmission, but it may be an area ready for research. 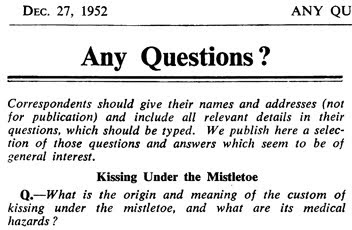 In regard to spreading syphilis through kissing, “certain very delicate micro-organisms … can certainly be transmitted directly, notably those of Vincent’s infection [aka “trench mouth”] and syphilis.” The author does put things in perspective, saying that many mouth-bourne bacteria have no problem living outside the mouth, therefore “it is of course worse to be sneezed or coughed at, and the probability is … that a kiss would be preferable to either of these experiences.”

It goes on to warn, “Don’t assume you know where your family members’ lips have been” (my paraphrasing). The author then follows through on this familial warning with a tongue-in-cheek, washing-my-hands-of-the-situation comment: “This discordant and unpleasant note is introduced only for the sake of scientific completeness.” Right.

But there’s more to holiday parties than extragenital disease transmission. Seasonal social gatherings are beset with unforeseen physiological mechanisms and their repurcusions. This section in BMJ includes a Q&A for other holiday hazards, including:

I don’t know about that last question, but evidence suggests that the holidays are a bloody minefield.

I have a yearly ritual — as soon as Thanksgiving is over, I start listening to Christmas music. Since starting this research, all I now hear are clandestine death threats. Whether it’s Burl Ives trying to poison me with his “Holly Jolly Christmas” or Andy Williams wishing me lip sores and an unspecified cardiac condition: “There’ll be much mistletoe-ing / And hearts will be glowing.” Maybe Andy is trying to warn us, I can’t tell. And a montage from some sort of Martin Scorsese film reels through my head when I hear Frank Sinatra insinuate: “Oh, by gosh, by golly. It’s time for mistletoe and holly. Fancy ties an’ granny’s pies, an’ folks stealin’ a kiss or two. As they whisper, Merry Christmas to you.” I’m starting to think that Grandma had it lucky when she got run over by that reindeer. At least she went quickly.

So, from the safety of my basement archives bunker, I wish everyone a Happy Holiday Season. I’m still deciding whether to light a candle or curse the darkness, but either way I hope to see you in the New Year.