One more post in honor of Ada Lovelace Day, who connects to many women in many different ways. I’m connecting Ada with Dr. Catherine Macfarlane. Had Ada been born a bit later, or Catherine Macfarlane earlier, Ada’s life may have lasted longer than her short 36 years.

Ada Lovelace died fairly young of cancer, in 1852. Some sources say uterine cancer specifically and some say she was bled to death in treating her illness.

The same year of Ada’s death, when women had few options for medical training, the Female Medical College of Pennsylvania (later Woman’s Med) graduated its first class of eight women physicians. Its 46th class of women physicians graduated in 1898 and included Catherine Macfarlane. 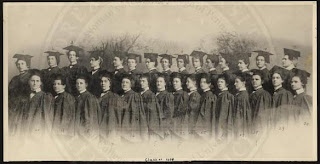 Class of 1898, Woman’s Medical College of Pennsylvania (unfortunately Macfarlane is missing from the photograph). 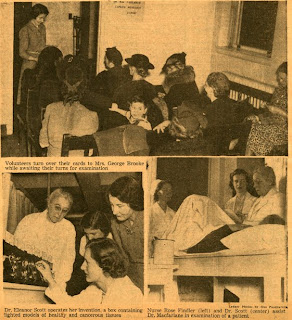 Macfarlane practiced and taught obstetrics and gynecology in Philadelphia and in time turned to research. Her work led to a theory that regular examination of women in apparent good health would be the best method to detect cancer in its early stages when it was most treatable. Initially, her theories were not popular and she had little support for her research.
In 1938 she co-founded the Cancer Control Research Project at Woman’s Med where women patients came in for regular pelvic examinations. The clinic was planned to run for five years but ultimately covered a fifteen-year period, providing data from over one thousand women. The project’s 1953 findings supported Macfarlane’s theory and indicated that regular exams could help detect cancer of the uterus early on. Macfarlane then helped establish the first uterine cancer screening in Philadelphia, one of the earliest programs in the country. 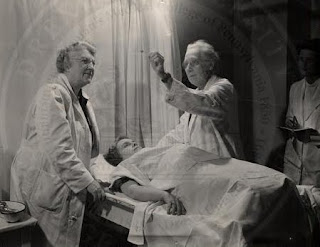 Had Catherine Macfarlane been born earlier, would her work have changed the outcome of Ada Lovelace’s illness? In Lovelace’s era, women had almost no support for studying medicine; even in Macfarlane’s time, she was discouraged in pursuing her research. However, perhaps Lovelace’s passion and interest fanned the development of schools educating women, attitudes about women’s health, and ultimately, Macfarlane’s groundbreaking work in early cancer detection. 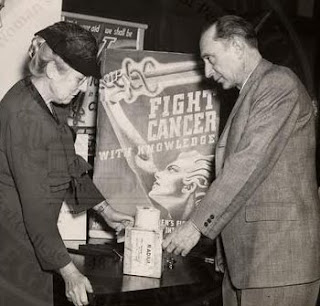 Catharine Macfarlane and Frank Hartman in front of cancer poster.