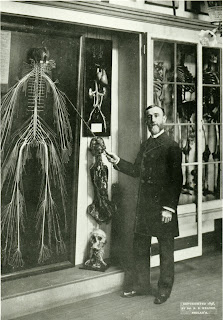 She became famous at the 1893 World’s Columbian Exposition, generations of medical students consider her part of their alma mater(s) and she’s even been considered an off-the-beaten-track tourist attraction – but who was ‘Harriet?’

Hahnemann Medical College in the 1880s was still very much a homeopathic institution – but that did not mean its professors overlooked basics such as anatomy. Enter Dr. Rufus B. Weaver, Professor of Anatomy. Weaver was an 1865 graduate of Penn Medical College, a institution that lasted from 1853-1880, and also known as the Penn Medical University – incidentally, it was co-ed from the start, as were a few other eclectic medical schools of the era. It was a purely homeopathic school which shared a founder with Woman’s Medical College of Pennsylvania (although a few early graduates later became homeopaths, teaching at Woman’s Med was always allopathic) in Dr. Joseph Longshore.

Weaver joined the Hahnemann faculty in 1869, first as a ‘demonstrator’ of Anatomy (‘demonstrator’ was a common job title for medical school faculty members in the nineteenth century), and later as a full professor. At some point during his career there in the 1880s, he crossed paths with Harriet Cole, an African-American cleaner at the College (you can find her described in more colorful fashion, as it were, by Time Magazine in the 1930s). When she died of tuberculosis in 1888, she willed her body to the College (although it’s equally possible that there was some opportunism at work on Weaver’s part). He set about dissecting her nervous system, a process that took him over five months of full-time work, and mounted it for display. While the intent was to employ Harriet (or, more accurately, what was left of her) as a teaching aid, the results were considered so tremendous that she was later submitted for display at the Columbian Exposition in Chicago, winning a number of prizes.

Harriet returned to Hahnemann as first ‘worked’ as a teaching tool, and later as a museum piece; restored by Hahnemann-trained cardiologist Dr. George Geckeler in the 1960s, she became part of the fabric of the institution and greeted medical students at Hahnemann’s Center City Philadelphia campus – even through mergers and related administrative upheavals.

Harriet remained in Center City until a recent renovation to the Hahnemann Library – she moved to Drexel University College of Medicine’s Queen Lane campus in 2008. While she is no longer part of the curriculum, Harriet still oversees current medical students; she is posted just outside the bookstore in the Student Activities Center.

While some who see Harriet in passing do not realize she was part of a real person, Weaver’s groundbreaking work with ‘Harriet’ continues to be referenced in medical journals – even as recently as 2005. While we know very little about Harriet Cole’s life, hopefully this sheds a little light on someone who made Weaver’s scientific efforts a success – and who deserves more than a brief footnote in his biography.